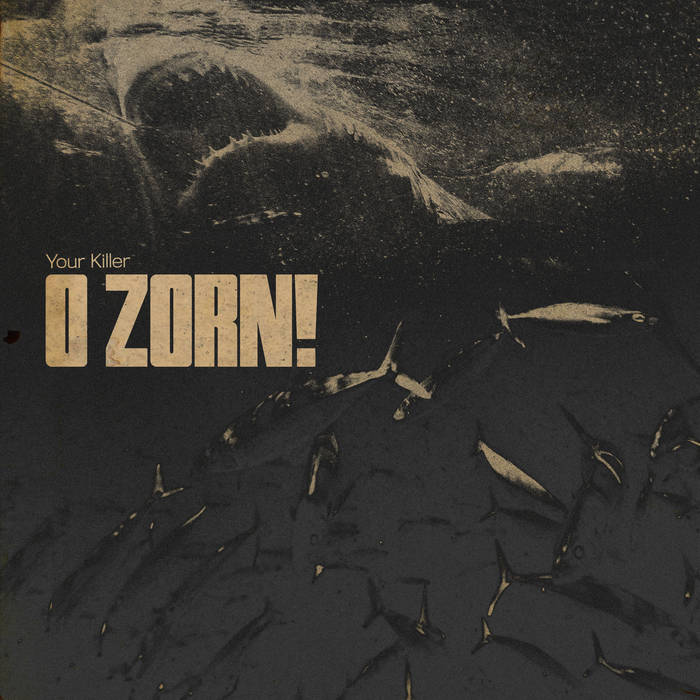 ZORN:
Destroyed, murdered. Denotes a catastrophe.
From the Watership Down glossary of Lapine, the language of rabbits.

When all is said and done, The Riff reigns supreme.

Formed in Long Beach, California, in 2010 and led by vocalist/guitarist Bill Kielty, pulverising post-sludge trio O ZORN! have forged ahead through the best part of a decade, a noble but troubled force in pursuit of the ultimate heavy expression. A trio of veterans from the Long Beach underground scene, their story began as most do: jams, shows, demos and shirts. More importantly, as Bill and his comrades plied their nascent trade, they conjured a fearless and ferocious sound that moulded the very best of doom, sludge, hardcore and psychedelic extremity into a single, streamlined roar of gargantuan riffing power and fiercely focused angst.

Two years on from the release of their self-titled debut, O ZORN! are in an unforgiving mood on their long-awaited follow-up, Your Killer. Bigger, bolder, more diverse and yet ever more focused than its predecessor, it showcases the subtle evolution of the band’s sound and the renewed strength drawn from the current line-up of Bill, co-guitarist Billy and drummer Danny Walker.

Recorded at Foo Fighters’ now legendary 606 Studio, using the much-hyped Sound City Neve mixing board, it’s also an album that will remove scalps from 100 paces: once again, the power of Bill and Billy’s riffs collides with Bill Kielty’s mutant poetry and anguished howl, all driven inexorably forward by Danny Walker’s unstoppable battery. This time round, O ZORN! are very plainly ready for the long haul and itching to take this exceptional new material to the people.

“I wouldn’t say we’ve strayed much in sound, from our first record to our now second,” shrugs Bill. “It was more a lateral move, I suppose. One might say that our new album is a bit more atmospheric and riding some softer emotions. Where we have evolved quite a bit however, is in our live act. We're big on visuals. Regardless of where we’re playing, be it a small bar or a bigger venue, if they're not equipped with what it's going to take to make our live performance look the way we sound, we're going to handle it ourselves. We take a lot of pride in our live shows."

Behind the walls of riffs and the shimmering sea of distortion, O ZORN! are also raising a flag for the disenfranchised, forgotten and oppressed. Doom and sludge have always been genres devoted to digging around in humanity’s failures, but the songs on Your Killer strip away all the distracting artifice and go straight for the emotional jugular. Life fucking sucks: redemption through riffs and rage is the only way forward.

“The general theme of the album is human suffering, in whatever shape or form that may be,” says Bill. “The distress from war and sickness. Hopelessness and homelessness. The search for something bigger and never finding it. The let-downs. Never finding or being loved. Getting suckered in. Substance abuse. Letting people down. Being let down. Accepting what you are, no matter how bad you look to others.”

A blazing and inspirational eruption of deeply organic riff worship, O ZORN! will unleash their extraordinary new music on the world very soon. It’s a wild, versatile but ruthlessly heavy ride, veering from the viscerally catchy, devil’s desert rock of Casket – a tale of a wounded marine’s long, bloody march to safety – through to the caveman doom-spiral of Secret Santa: a paean to addiction and those helpful souls that get us started on cigarettes. But the truly dark hues of the second O ZORN! record are best exemplified amid ululating space-sludge melancholy fury of its terrifying, climactic title track, Your Killer: “We’ll meet again. Suck it up. We’ll reach the stars. Your violent fears can come along. Soak it up…”

Heavy music for the heaviest of times: Your Killer awaits.

“Our hope is that this album is well received and that we can tour the world and entertain,” Bill concludes. ”Having people excited about what we do, it’s such a gift. We love it all!”

All songs written by B. Kielty
Recorded and Engineered by John Lousteau at 606 Studios - Northridge, CA
Mixed & Mastered by Paul Miner at Buzzbomb Studios - Orange, CA

Bandcamp Daily  your guide to the world of Bandcamp

Featuring Oakland sounds from the Smart Bomb collective and Samplelov.